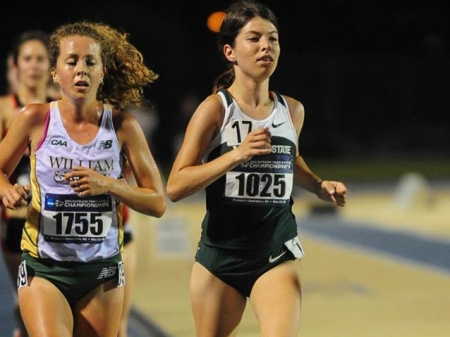 “It was a conservative, exclusive, Catholic institution — all the things I thought I wanted. In my mind, I clawed my way to a respectable ACT score and valedictorian status for that prestigious college acceptance letter. I made three or four visits to Notre Dame in less than a year. I felt I belonged there,” Melanie said.

But, Notre Dame’s admissions department was like, actually you don’t, and rejected her. And, after a few more rejections letters, She found herself stuck with her safety school, Michigan State University, and she was not happy about it.

She would end up traveling on varsity, scoring at the Big Ten Championships at 10,000 meters, winning the Raleigh Relays, running a PR of 33:53, qualifying for NCAA regionals on the track three times and becoming a scholarship athlete.

But first, she hated it.

Melanie called the Michigan State coaches in mid April—which is pretty late with a May 1 deadline to declare—with an attitude that was all, “I guess I’m coming here. Can I join your team?” and got the OK to walk on.

She had never been all-state and walking onto a team with girls who had racked up all-state certificates was intimidating. There were all these names she always saw at the top of the results from championship meets. “I felt like there was a rift right away,” she said.

Not to mention the social rift she discovered when practices started and she realized all the freshmen had been hanging out without her.

Her late join and the resulting different-floor-from-everyone-else room assignment was enough to make her feel effectively isolated.

“There were these mental and physical rifts from the beginning,” she said.

“I believed I would never ever fit in with these people,” she said, and planned to transfer.

“Every night I’d be Skyping people up until like three in the morning—all my friends back home. Just telling them how much I want to be home, and how I didn’t like it, and everything sucked, [how] it wasn’t fun.”

Melanie would have her parents pick her up every other weekend until they eventually told her, “We love having you home, but this is a lot of driving. Maybe you can make some friends who live in the area…”

And she emphatically refused.

And Melanie’s running wasn’t going much better than her social life. She was the worst girl on the team, except for a girl who had a stress fracture.

“Every workout to me would be such a cringe moment of, ‘When am I getting pulled out today?’” she said.

Even keeping up on base runs was a struggle. She’d hope for lights to turn red so she could catch back up.

“I couldn’t stay up with people on a [base] run. So everyday was just nerves.”

After practice, Melanie would be ready to saunter up to her dorm room and go to sleep. Or at the very least, avoid her teammates for dinner.

“I refused to make friends with these really cool people. And so they’re all, you know, making plans to get dinner together and stuff, and I’m like, ‘I’m gonna go to this cafeteria, just to not be around you’…It was stupid. It was so stupid!” she said (pretty much yelled).

Then, on a nice sunny day, after getting pulled from another workout on the track, she called her high school coach, Kevin Hanson (of the Hanson’s Original Distance Project), while walking back to her dorm alone. She told him, “I’m gonna quit, and I just thought you should know. Thanks for not giving up on me in high school.”

She tried to boy bye running.

Melanie described the conversation as both a rollercoaster of emotions and the turning point.

He asked, “Do you actually want to quit or are things just going bad?”

She said she didn’t listen at first; she argued and was hysterical.

“I coulda hit these times in high school! And I’m the worst person, and I fell off this person and this person!” she said (slash kinda yelled during the impression).

And she kept going and going, telling Kevin why she was bad. And he kept telling her to get her iron checked.

“He repeated that line so many times, like—do this. He was very firm about it. Soft, but firm.”

And eventually something shifted.

She had called Kevin crying, “I’m quitting, thank you so much, this was such a great sport, we had a good run,” and he had repeated enough times that she get her iron checked that eventually, she went from spiraling out to elated.

He was holding out a glass of water for her. And she finally took it.

“Something could be wrong with me! This is great!” Melanie said.

Maybe her iron was just low and she wasn’t a bad runner after all. She even wrote a poem about it that started, “If I am anemic / I shall be overjoyed…”

So she got her ferritin checked and it was ferritin = 3.

So she got her ferritin up and ran happily ever after!

Haha, this is running, so obviously I’m just kidding.

Getting that ferritin number back was a turning point to her turning point. It forced Melanie to communicate with her coaches, use her resources, to take a totally different approach to everything.

By the fall her sophomore year things were going better but she still found herself untraveled.

But by indoor track season things started really looking up.

Melanie dipped under 10 minutes for the first time for 3,000 meters, at a small meet, and women on the team reached out to her.

“I had like, Emily MacLeod [a multiple time all-American] reaching out to me, like—the top girls on the team, who were at a meet of their own, or had a workout of their own—or something else going on—who were not at this race, who heard about it and were like, ‘This is so good! This is awesome! You’re going to be traveling with us soon.’”

She was skeptical, thinking, are you sure?

Nevermind water, they were holding out metaphorical Gatorade for her.

“Just seeing that these people, that I had worked so hard to shut out, were reaching out to me and wanted me to know that they were proud of me…” she said. It made her realize she had people to run for. “I have eyes on me from people who care about my training on this team and I need to be paying them the same respect.”

And it was true, soon she was traveling with them.

Melanie traveled with the team to a meet at Indiana University and was seeded into the slow heat. Being in the slow heat wasn’t exactly her ideal situation, but, she said she acknowledged that this was going to be a process. That these things take time.

And part of the process was winning that slow heat and having her mind blown by peoples’ reactions.

The head coach, Walt Drenth was “stoked.” The sprint coach, Randy Gillon, was so excited for her and she thought to herself, “This guy coaches sprints and he watched my whole race and was super excited,” she said.

“Just having these coaches, who I didn’t even think knew who I was–[they] seemed excited for me…and teammates I worked so hard to shut out being excited for me…it was impossible for me to not want to give them the same energy and positivity in return.”

“Sophomore year was just night and day,” she said. “Going from us versus them to: they are my teammates; we are all one team; [being] very protective of them; [they are] very special to me.”

Melanie said the highlights of her collegiate career, for her, are:

She said she got glasses of water from:

“Michigan State: definitely Emily MacLeod, definitely Lisa Senakiewich, definitely Angela Swain, definitely Veronica Wilson. And as we go through the years, I’d eventually give you the names of every single person on the team. Easily. But those are just some names, right away, who very early on were always in my court, on my side.”

After college, Melanie went on to run for the Hanson’s OG Distance Project for three years. She’s currently in the hard life transition of leaving that training group and looking for another, while also job hunting.

You can read more about it and her current glasses of water here on her blog.

Thanks for reading! Let me know what else you’d like to read about, or if you want to share your story, by emailing me at: nicolebbush.blog@gmail.com.

I'm blogging for fun, but if you wanted to contribute a burrito to the blogging process, I wouldn't object.